Why I love stacking and dropped it

One of the things that Shadow Empire will not have (much) is: stacking. For the uninitiated: stacking is the ability to put more than one unit in a hex. In my Decisive Campaigns and Advanced Tactics titles you can stack for example up to 16 units in 1 hex. 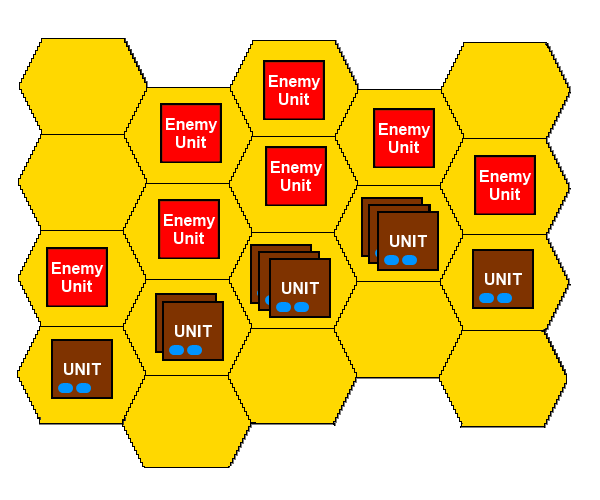 Above is an example of stacking. It cost me a lot of emotional effort to drop this mechanic. But I am pleased with the result. A game without stacking is much easier to play by non-grognard players and allows for nicer graphics. And.. as I will argue can provide the same gameplay. Also it is nice to get some diversity between my new engine and existing engines. I never did a game without stacking rules.

First I was resistant to dropping this mechanic, but when I took the time to analyse why I loved stacking I found a design method around it. The thing I found is I do not love stacking in it self, but rather the type of thinking stacking rules allow me to do. It is mainly two things: It allows to keep continuous frontlines and it allows to put a focus point (or schwerpunkt if you like) on a specific part of the front. Actually an important third thing is that it allows mixing units, but that is beyond the scope of this blog post. 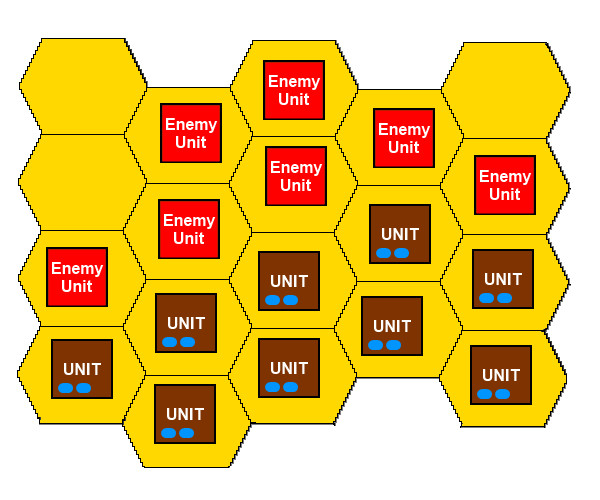 Initially I figured if I abolished stacking rules and subsequently would want to focus my power on a specific part of the front I would get this pile up of units behind the frontline.
And that would feel wrong. (as you can see above)

However I arrived at the obvious solution after some time: reduce the number of units, but increase their area of effect. By introducing opportunity fire units do not need to be on every hex in a frontline to keep that line. You can leave a hex open every hex and the enemy will have a hard time penetrating that line. You could even leave two hexes open every hex to have the same effect. 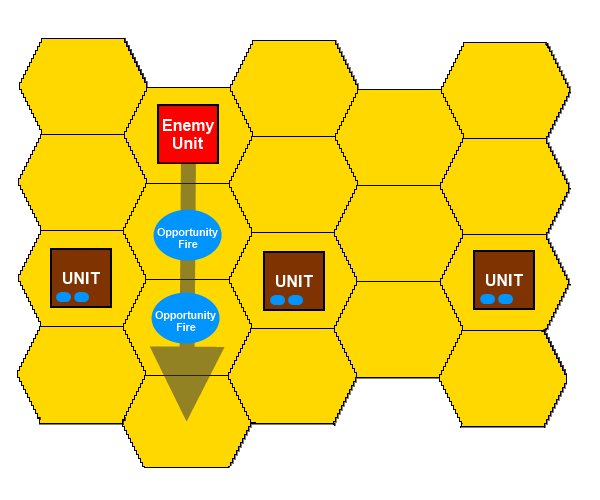 A determined enemy with lots of units could force a breakthrough, though not in 1 turn. Well.. unless they have really superior equipment or are supported with artillery and bombers of course :)

Now if I really would like to keep my line I would add more units to it.

Essential for this approach is of course making sure that the unit count is in balance with the size of the map. So the player will not be able to have full frontlines on all fronts. In my test games so far I am not missing stacking at all. The ability to choose between different densities of frontline occupation works well for me with Shadow Empire.

And yes of course I have to admit that the level of subtlety and micro-management stacking provides in for example Decisive Campaigns could not be replaced by this approach. But that is a different kind of game. For starters it is historical. Sometimes you just need 10 divisions to be in Stalingrad. Shadow Empire is a post-apocalyptic era game aimed at a slightly less hardcore audience and for it I think I struck the right balance.

Next time I’ll discuss some other mechanics. For almost all battle design decisions my aim is to simplify gameplay but keep the core decisions of more complicated games in there.
In a few months time there might even be some graphical sneakpeaks :)

This entry was posted in Uncategorized. Bookmark the permalink.

15 Responses to Why I love stacking and dropped it